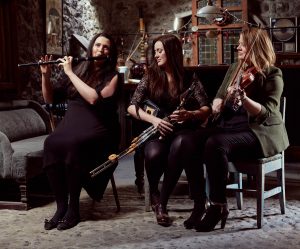 Anna, Sheila and Clare Friel are traditional musicians born in Glasgow with their family roots firmly entrenched in the Donegal Gaeltacht (Derrynamansher). Being siblings, they achieve a close blend on fiddle, flute and uilleann pipes interspersed with songs sang in unison, many from their family and local repertoire.

Since the launch of their debut album, they have performed in various venues and festivals across Europe, America and Asia and have appeared as guests on stage or toured with acts such as Altan, The Chieftains, Lúnasa, Sharon Shannon, The Máirtín O’Connor Trio, Cherish the Ladies, Solas and Fidil. In 2016, the girls performed at Festival Interceltique de Lorient, and won the prestigious Trophée Loïc Raison.

2018 has been a very exciting time for the girls as they released their new album ‘Before the Sun’ with Hajime Takahashi and Cathal Ó Curráin, produced by Ciarán Ó Maonaigh and recorded by Jack Talty. This was launched to a sold out crowd at Celtic Connections 2018 in Glasgow.

In November 2017, Clare was announced as the recipient of TG4 Gradam Ceoil Ceoiltóir Óg/Young Musician of the Year 2018. She was very honoured to accept this award in February 2018, with other recipients for other awards on the night including Frankie Gavin (Musician of the Year), Patsy Hanly (Lifetime Achievement), Pádraigín Ní Uallacháin (Outstanding Contribution), Máire Ní Chéileachair (Traditional Singer) and a special once-off award to The Field Marshal Montgomery Pipe Band: in recognition of their excellence in piping. It was a huge achievement to be included in such an incredible line up for the night, and also to be added to a list of amazing past winners, as well as being the first person in Scotland to win the award.